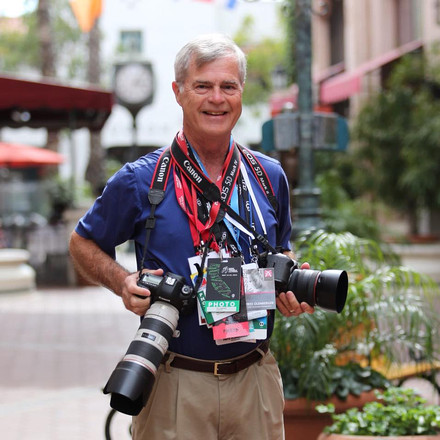 Fritz Olenberger was born in Lincoln, Nebraska in 1949. He became interested in photography in high school,
using Leica cameras his father gave him. Over the past 50 years he has been enjoying photography as a hobby. His skills are self-taught.
His images have appeared the San Francisco Chronicle, Washington Post, Hollywood Confidential, the Santa Barbara News-Press, and on the covers many Santa Barbara periodicals. His images of Spain, Greece, Canada, and the US have appeared on the covers of Magellan’s Travel Catalog.
Fritz is a regular contributor to the Santa Barbara on-line news sources Noozhawk and Edhat, and is a volunteer photographer for many non-profit organizations, including

He has been a credentialed photographer for the Tournament of Roses Parade and the Amgen Tour of California, and has been a guest lecturer on Photojournalism at Antioch University.